It’s crystal clear that this anniversary is a pretty special occasion. After all, 15 years have passed since the “I do’s”— and married life is still solid and extra rosy.

In case you haven’t figured it out already, this beautiful milestone is the “crystal” anniversary, which signifies beauty and elegance. In fact, crystal is the first truly expensive gift in the traditional anniversary list. That’s because its value represents the sacrifice and investment the couple has made to their marriage over the past 15 years. It’s also a symbol of clarity and transparency. In other words, a reflection of the couple’s close relationship. We’re guessing they now probably know each other better than they know themselves!

As for the official flower of this special anniversary, it’s the one flower that symbolizes romance and love more than any other. Yep, you guessed it: the red rose. Which goes hand in hand with this anniversary’s gemstone: the ruby, signifying love and friendship. As a fun fact, the ruby is widely believed to make love more passionate. What a lovely thought! 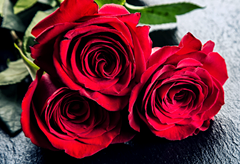