Woo hoo! Thirty-eight years deserves a wild celebration! A trip to Costa Rica? A Hawaiian luau? Okay, at least a round of margaritas. We all have our own definitions of exotic, but that’s what makes the 38th wedding anniversary traditional gift fun to give and exciting to get. Exotic to you might mean interesting foods, faraway lands, or sexy lingerie, while exotic to someone else might simply mean adding mango to their smoothie. But the whole point of this 38th anniversary gift is to give or do something unfamiliar, out of the ordinary…and maybe spice things up a bit.

Speaking of unfamiliar, beryl and tourmaline are the contemporary gifts…but do you know what they actually are? How about emerald and aquamarine? Those are both well-known variations of beryl. Tourmaline, called the rainbow gemstone, is a gorgeous and unique mineral that makes a beautiful centerpiece. And both are great anniversary gifts as jewelry or art.

Even though you may have plenty of idea-starters already, we can’t leave out the adorable flower for this anniversary, the bleeding heart. With cartoon-like hearts covering every stem, the bleeding heart is the most boldly symbolic plant of deep emotion, love, passion, and connection. If you want a 38th anniversary gift that literally looks like love, then this is the flower to give. If you want a couple who looks like love…well, you know where to find them! 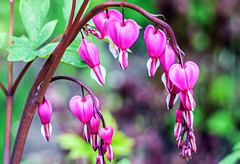