Wow, 60 years of married life! The years probably seem like they’ve flown by so quickly—from a smitten couple to newlyweds, then maybe parents, grandparents, and even great grandparents, too.

And now, it’s an incredibly beautiful milestone. A diamond anniversary. A cherished moment to be joyfully celebrated!

A diamond is a symbol of love, endurance, and perseverance. It is also said that the fire in the middle of a diamond symbolizes the constant flame of love. The most famous diamond in the world is the Hope diamond, now housed in the Smithsonian Institute in Washington, D.C.

As for this anniversary’s flower, a lavender rose is one of the rarest, most stunning of all roses. With its captivating allure, this rose has also long held considerable symbolic significance. In fact, two specific garden varieties are appropriately called “Diamond Anniversary” and “Diamond Wishes.”

Honor that special couple who forged ahead through thick and thin—together. They certainly deserve the most royal treatment. 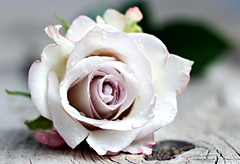